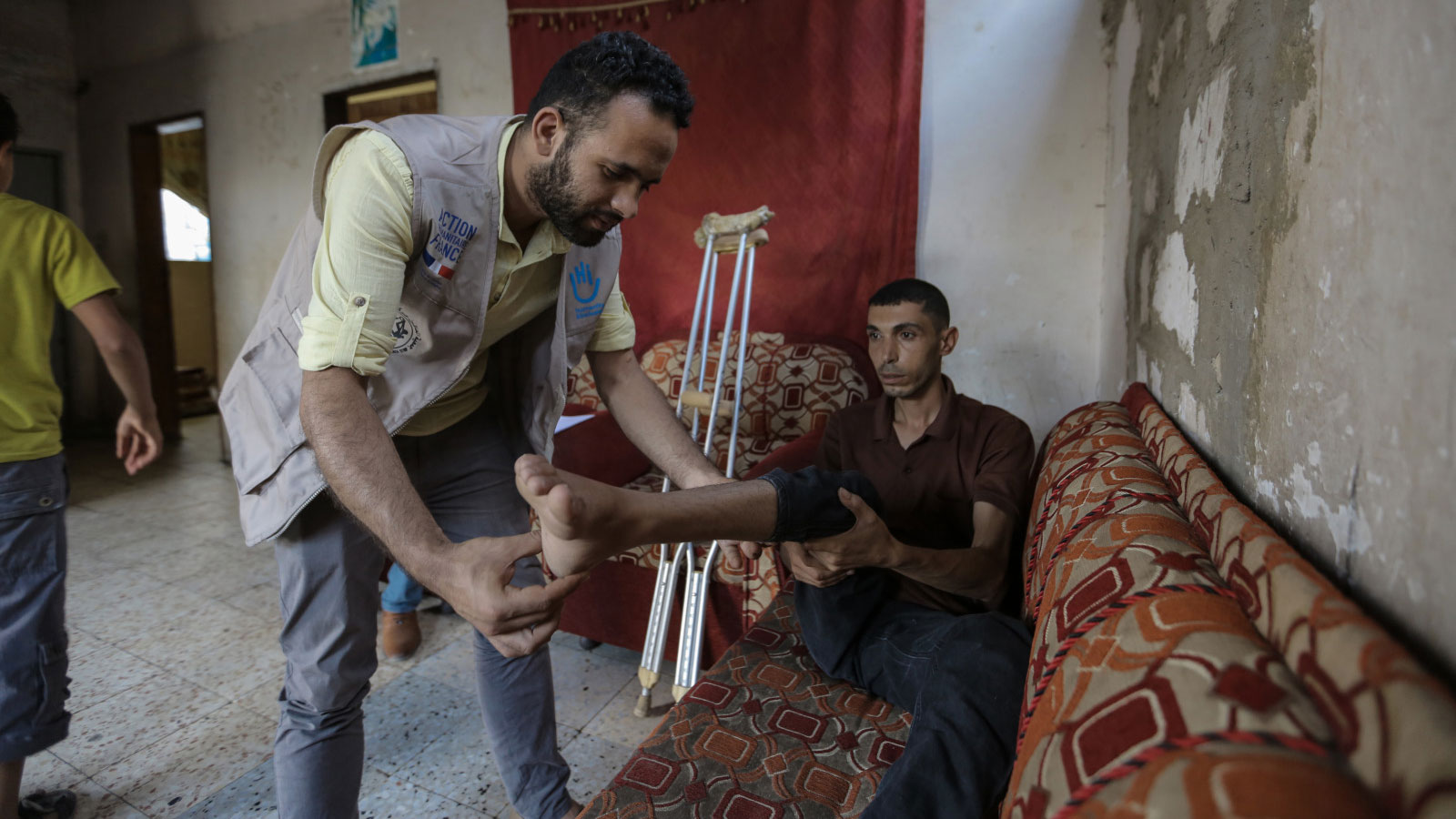 The bullet entered Alaa’s right leg just above the heel and left him with an open exit wound. His injury resulted in severe nerve damage, which makes it difficult for him to control his leg or put his foot firmly on the ground. “The pain at night is unbearable,” he says. “I don’t know when or if I’ll be able to drive again. I have a family to support, look at them, pointing to his four children.”

Alaa, along with his wife, and their four children.

Alaa was injured during demonstrations at the border between Israel and Gaza. People with gunshot wounds, like Alaa, require long-term medical care. After an operation, it can take months or even years of rehabilitation to restore their mobility. During this long period of convalescence, patients can become temporarily disabled and unable to work. Alaa is one of hundreds of people with this type of injury.

Alaa used to work as a taxi driver. He rented a car and his earnings varied from day-to-day, depending on how many fares he picked up. He lives in a very small, dilapidated house in northern Gaza. The ceiling is scored with holes, providing little protection from the cold and rain during the cooler months. “Fortunately, I’ve been getting help from humanitarian organizations. I need rehabilitation care and don’t have enough money to pay for them. I hope they’ll be able to help me until I get back on my feet. I need to return to work as soon as possible.”

Alaa spends his days walking on crutches between his bed, sofa, and the front door of his home, where he can see the street his neighbors. “It’s like living behind bars,” he adds. “I can’t work, so I don’t have any money. Today, it was my neighbor who brought me two chickens and refilled my gas bottle.”

HI’s team has been assisting Alaa for the past two weeks. Most days, he receives a visit from an HI physical therapist and a psychologist. It takes time and determination to recover from a gunshot wound, and Alaa will need two more operations to repair the damage to his leg.

“When I’m better again, I’d like to have my own taxi. But given my current condition, I think it might be easier to set up a small business.”

The Gaza crisis and HI’s response

More than 14,600 people have been injured since the start of the demonstrations last March, of whom nearly 8,000 had to be hospitalized. Over the course of a single month, HI helped more than 500 people by providing them with follow-up rehabilitation care and psychosocial support. We also distributed mobility devices such as crutches, wheelchairs, and walkers.