Injured in the earthquake, Oscar brings positivity to hospital block

On a recent visit to a hospital in Les Cayes, Humanity & Inclusion’s staff met Oscar, who remains positive despite his home being destroyed and his leg broken in the earthquake.

On August 14, Oscar was just outside his home, walking down the narrow alley between two buildings, when he felt the ground begin to move.

“The walls swayed back and forth and I started to run,” he says. “I knew immediately that it was an earthquake, and that they could collapse at any moment." Before he could escape, the bricks began crashing onto him, cutting his arms and shattering his leg. Despite his broken leg, Oscar continued to run to avoid being buried by the rubble.

Once he made it to safety, Oscar’s two children rushed him to the nearest hospital. Unfortunately, the hospital was unable to care for his wounds. His injuries were too severe, and he would require an emergency operation on his leg. He was evacuated by helicopter to Port-au-Prince for his surgery. Now, Oscar is recovering at the OFATMA hospital in Les Cayes. 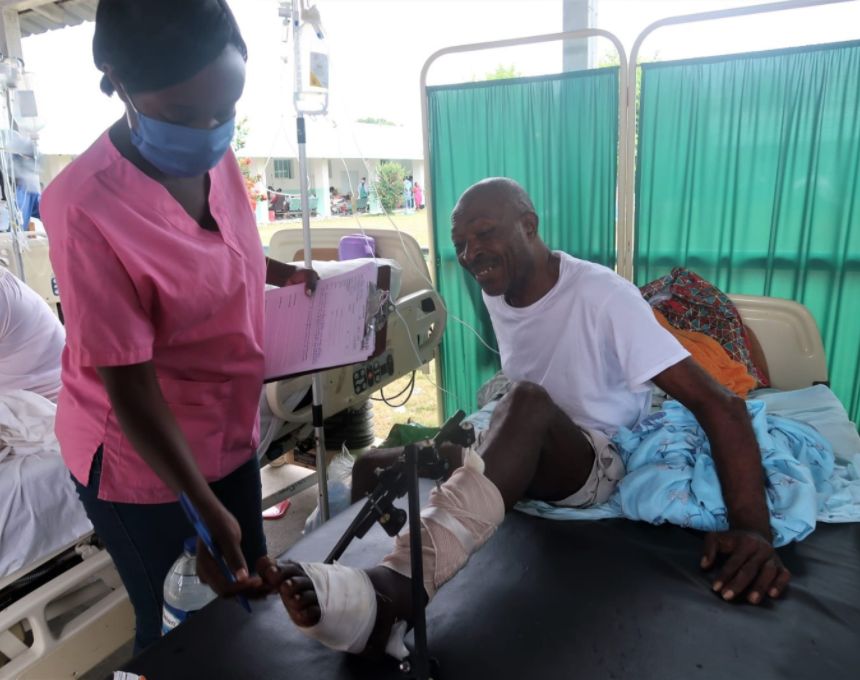 His bed sits in a row among dozens of others who were injured in the earthquake. The positive ambiance is something the Humanity & Inclusion teams had yet to see following the disaster. Oscar's smile lights up the block. In his arms, he cuddles the baby of a fellow patient, and the cluster of people around him laugh and smile from their beds.

Oscar has been in the hospital for over a week. When asked if he's ready to go home, he says: "My house was destroyed in the earthquake. But I am happy no matter where I am. We've become a family here. These people are now my friends.” Everyone smiles and nods in agreement.

Before the earthquake, Oscar worked as a mason. He enjoys his job, but will need to wait until he has healed to get back to work to provide for his family.

Oscar’s physical therapist, Patricia, is helping make that happen as soon as possible. She teaches Oscar functional exercises to keep his muscles strong, and to help him remain active during his bed rest, and shows him the correct way to use his new crutches, which were delivered by Humanity & Inclusion’s team. He will require regular rehabilitation sessions to ensure that he fully heals from his injuries.

Humanity & Inclusion’s emergency team has partnered with the hospital to provide physical therapy reinforcements, like Patricia, since it previously had no rehabilitation services in place. For Oscar, and countless others injured in the earthquake, this care is essential in preventing long-term consequences, and taking the first steps to a full recovery.