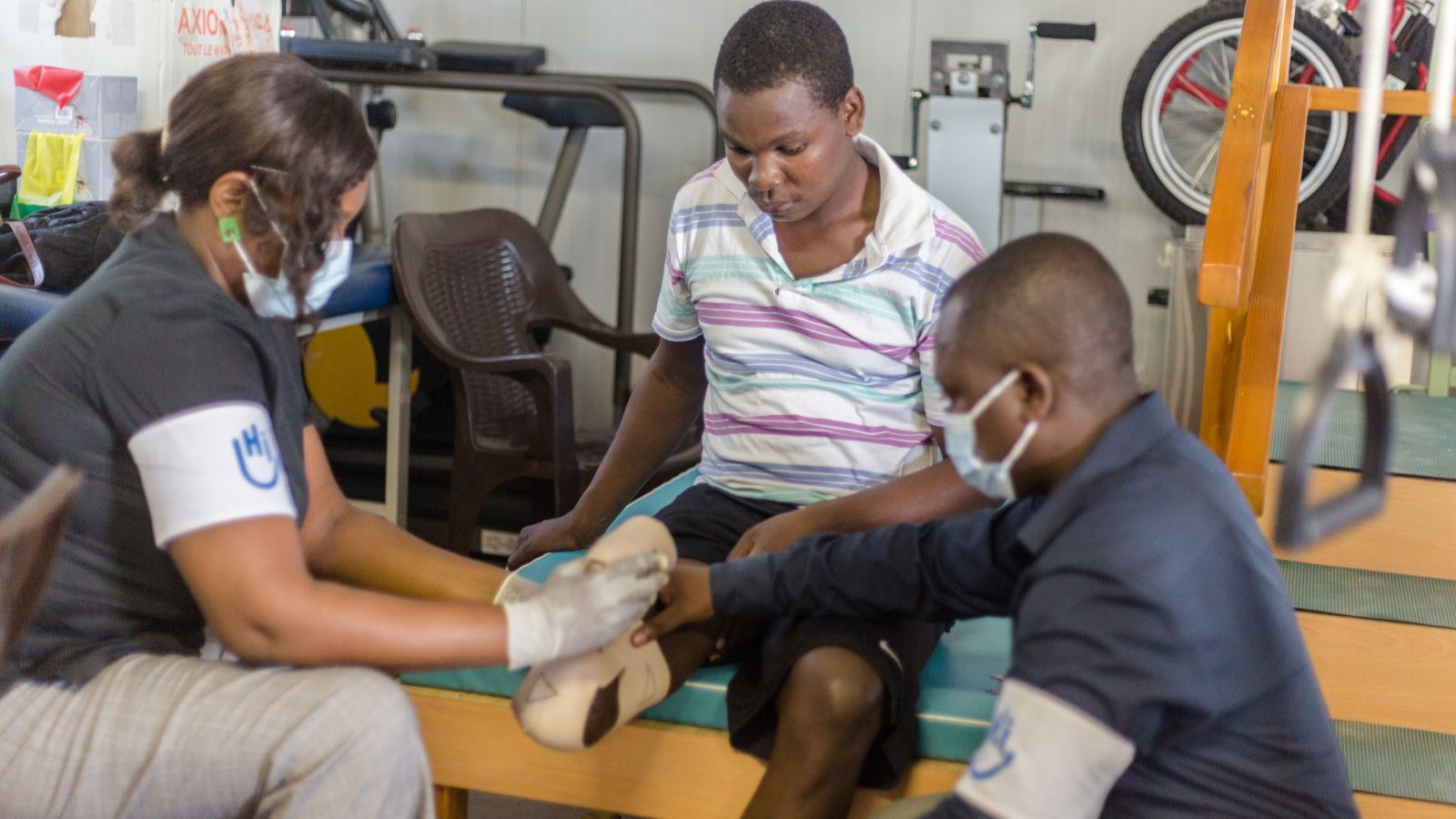 In its ongoing support of Haiti earthquake survivors, Humanity & Inclusion works to fill the rehabilitation gap in affected communities.

The Haiti earthquake injured more than 12,700 people, causing fractures, open wounds and, in some cases, eventual amputations. In the early days following the tragic disaster, many went without appropriate care due to an under-resourced health system, difficulty reaching the nearest hospital, transportation and treatment costs, personal beliefs about the medical system, or the incorrect idea that their wounds would heal on their own. Such delays often resulted in worsening injuries, necessitating even more intensive and long-term care.

Even for those fortunate enough to receive medical attention quickly, care was largely incomplete as few facilities offered any rehabilitation services to ensure proper healing and prevent long-term disability.

One of the key goals of this intervention is supporting and reinforcing the capacities of local actors who are already responding and will continue serving the community long after the emergency.

To help strengthen the structures already in place, Humanity & Inclusion has provided equipment, administrative support and hosts weekly trainings for health personnel, including the use of assistive devices, early rehabilitation services, amputation, tele-rehabilitation and identification of disabilities. Humanity & Inclusion also provides weekly collaborative sessions to discuss the most suitable care for complicated cases in each health structure.

Children are among the most vulnerable groups affected by the disaster. As of January, the Humanity & Inclusion emergency response in Haiti had helped with the care of 115 children, most of which had fractures from trauma injuries.

Only 2 years old and just learning to walk, Mykelson was severely injured during the earthquake and lost the use of his foot.

“Our house was falling down, when a brick fell and hit my son,” his father explains. “The next day, we came to the hospital in the Cayes where Medecins Sans Frontieres cared for his wounds for a week and then referred us to Humanity & Inclusion. Now our son receives rehabilitation care three times a week from Humanity & Inclusion, and has been coming for about two months. He’s starting to be able to walk again without much pain, though he still has some discomfort. We just hope that our child will be able to walk normally again.”

Mykelson will soon receive a brace, which will help him walk with more ease and independence.

"When the earthquake hit on August 14, I was struck by a beam while running to escape my home,” Josselin says. “I was operated on at Notre Dame Hospital and then I came here to the hospital in Les Cayes for care. I come once a week to sessions with Humanity & Inclusion, where I do therapeutic movements.

“I feel better. Before, I had to stay in bed but now I can walk again. I am very satisfied with the rehabilitation services and I thank the Humanity & Inclusion teams for their understanding, wisdom and skill.”

Horace, 46, is from the Grande-Anse department of Haiti and works as a mattress sales clerk. After sustaining injuries in the earthquake, he has been treated by Humanity & Inclusion’s rehabilitation team to facilitate his healing process.

“I could no longer bend my knee, but with the care I receive from Humanity & Inclusion, I’m starting to bend it better,” Horace explains. “I come three times a week for my sessions, and the people who provide my care do it with such kindness. My hope is that everything will soon return to normal and I will be able to stand on my own and continue my activities.”