Ethiopia: Fighting for the Right to an Education

Twins Tiyan and Zahara Bushra grew up doing everything together—playing, going to school, and helping their mother with her sewing business. However, at age seven, the parallel trajectory of their lives suddenly, irrevocably came to a halt. 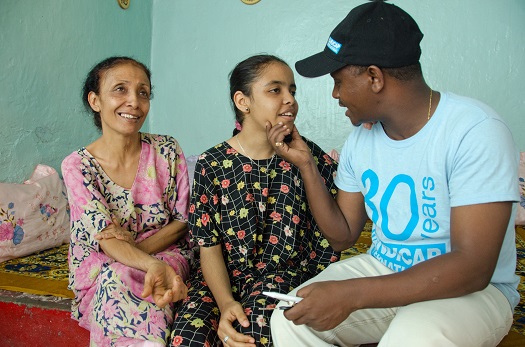 Tiyan suffered a massive seizure, the cause of which is still unknown. When her seizure had passed, Tiyan opened her eyes but could see only darkness. She tried to get up, but her limbs refused to move.

Unable to afford advanced medical care, which might have provided a clear diagnosis and treatment for Tiyan's condition, her mother, Selim, simply kept her at home and took care of her basic needs.

“I cried, cried, and cried,” says Tiyan, now 14 years old. “No more going to school or playing with my sister. All I could do was cry and ask God ‘why?'”

As the years passed, Tiyan regained some strength in her body and was able to walk again with assistance. She never regained her sight. She spent her days sitting inside her family's tiny, two-bedroom apartment, sewing fabric to keep busy.

"After being so depressed and angry I decided I wanted to live again and go to school,” says Tiyan. “My mother said ‘no' for a long time. She didn't believe I would be able to learn. Then she heard that a nearby school, Sabian 1, had programs for students with disabilities and she finally agreed to send me.”

Since Handicap International started working at Sabian 1, Tiyan has begun to learn to read and write in Braille. In Tiyan's integrated grade four classroom, a designated Braille teaching aid, Abeachu Mestet, who is also blind, sits by Tiyan to ensure she learning at the same pace as the rest of the class. Tiyan listens as her teacher discusses the day's lesson and then touches the Braille class notes in front of her. Abeachu places Tiyan's fingers on the raised dots and moves them across the page while Tiyan mouths the words. The teacher asks a question, and the first hand to shoot up is Tiyan's. She stands to speak, and Abeachu smiles and touches her arm as she answers correctly.

When Tiyan asks to use the toilet, two other students immediately walk to her side to guide her. While the Handicap International staff has conducted many training sessions with teachers and parents to discuss the importance of including and supporting students with disabilities, many of the students without disabilities at the school seem naturally inclined to help. In other classes, hearing students have learned sign language from their hearing impaired classmates and act as interpreters when teachers do not know sign language.

Tiyan's mother has also taken part in Handicap International training sessions. She has been able to help her daughter become more mobile and independent. With the use of a folding cane, Tiyan can now make short trips to the market. Still it's not easy for Tiyan to get to school. Transport between her home school in a local bajaj taxi costs 30 BIRR (about $1.70), which is often more than her mother, who is divorced, makes in a day sewing garments and selling mango juice popsicles. Most Ethiopians live on $3 a day or less. However, relatives help pay for the transport costs and both Tiyan and her mother are now determined to make sure she completes her primary education.