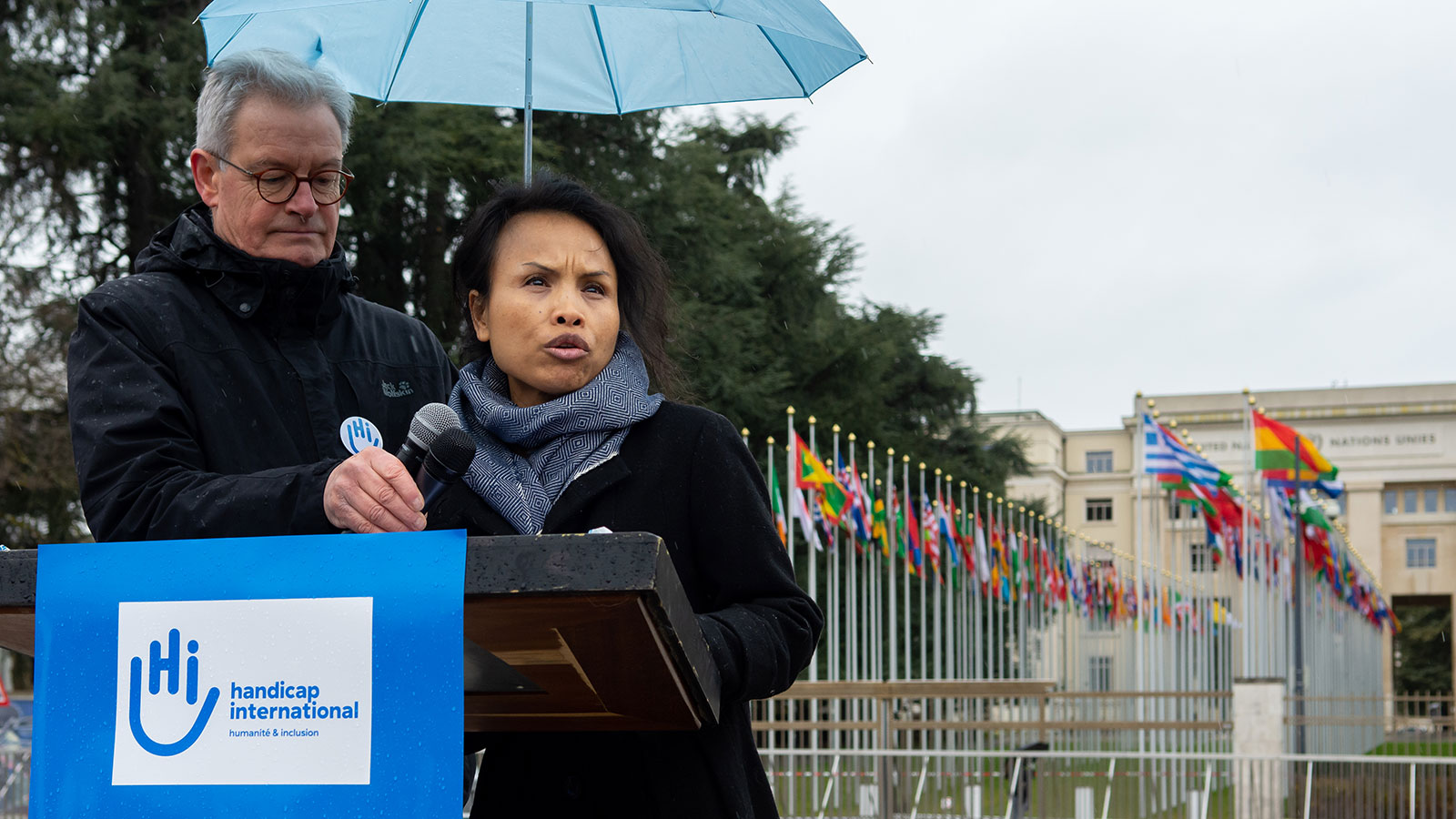 Landmine victim to US: ban landmines!

On Thursday, February 13, 2020 in Geneva, under the Broken Chair—a monument symbolic of the barbarity of mines, Humanity & Inclusion joined landmine survivor, Gniep Smoeun, to call on States Parties to the Ottawa Treaty to pressure the U.S. to reverse their deadly landmine policy shift.

“I was ten years old when I jumped on an anti-personnel mine in Cambodia," Gniep says as she addressed the public in front of the Palais des Nations in Geneva. "This mine took everything from me: my leg, my childhood dreams.” Gniep was one of Humanity & Inclusion's first beneficiaries from the 1980s. She was fitted with a prosthetic in the Kao I Dang camp located on the border between Cambodia and Thailand.

On January 31, the Trump Administration effectively committed the U.S. to resume the use, development, and stockpiling of antipersonnel landmines.

"On behalf of all mine victims around the world, I call for a the international community to push back at the Trump administration and demand the abandonment of this policy that will cause death and suffering."

Barbaric weapon from another time

Presented today by the Trump government as "an important tool," it is, however, a weapon that is designed to injure or kill. In 1997, the adoption of the Mine Ban Treaty marked a real victory against these indiscriminate weapons.

“We thought we had almost won with the signing of the Ottawa Treaty, and then the drastic reduction in the number of victims year after year," Gniep continues. "After all these efforts, the mines had really become 'outlaws,' but today all this is called into question!"

This decision by the American government reasons like a thunderbolt for the thousands of victims and the hundreds of NGOs which, like Humanity & Inclusion, have campaigned for the ban on this weapon. The United States was one of the few countries that has not yet joined the Mine Ban Treaty. However, for almost 30 years, the country has abstained from using them.

Fears that trade of landmines will return

Among the 6,897 victims counted in 2018, only 332 people were victims of so-called conventional mines. The other counted victims were injured or killed by “artisanal” or improvised mines.

“The market was dry, the mines were no longer sold," said Emmanuel Sauvage, Humanity & Inclusion's Violence Reduction Officer. "With their new so-called 'smart' mines, the Trump government is making an irresponsible decision that could kick-start the market for these cowardly weapons and reach new victims."

Humanity & Inclusion and Gniep Smoeun call on Signatory States to the Ottawa Treaty to use all their weight to push back on the Trump Administration. Their appeal is launched on the occasion of the 23rd international meeting of directors of national mine action programs taking place this week at the Palais des Nations in Geneva.

The Ottawa Treaty prohibits the acquisition, production, stockpiling and use of anti-personnel mines. It was opened for signature on December 3, 1997 and entered into force on March 1, 1999. 164 States are parties to the Treaty, or 80% of the nations of the world. The annual number of victims identified has been divided by ten in 15 years. In the early 1990s, the world tallied 30,000 victims, compared to 6,897 in 2018. Since the entry into force of the treaty in 1999, at least 2,200 km² of mined land has been cleared and States have destroyed 54 million stockpiled landmines. Mines still terrorize civilians in 60 states and territories, where mine contamination and explosive remnants of war lurk. Since 2014, the multiplication of conflicts has seen the use of mines increase.

Humanity & Inclusion is also a founder and coordinating member of the annual Landmine and Cluster Munition Monitor, which monitors these two international treaties and produces annual reports on their implementation. And we are a founding member of the International Network on Explosive Weapons.