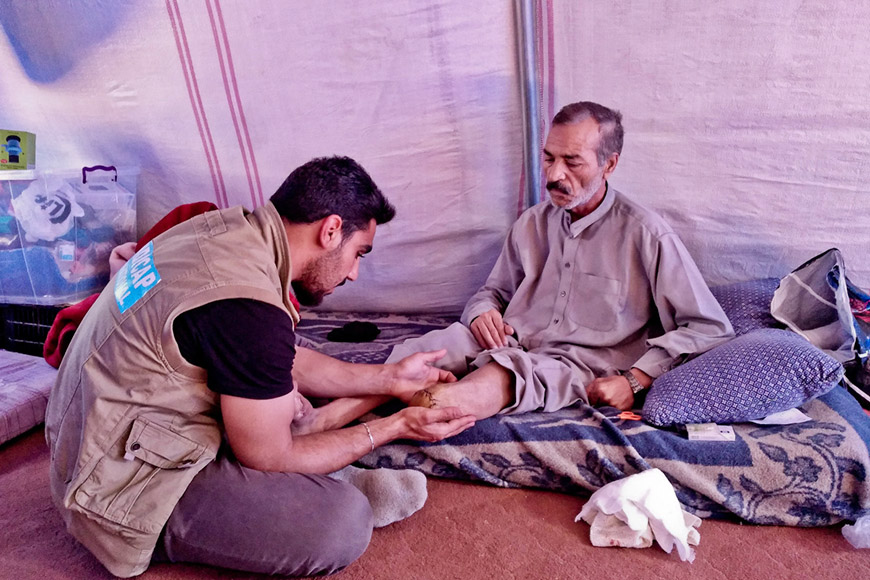 Adnan explains what happened: “My diabetes got much worse in 2014. My family and I were still living in Sinjar at the time. Islamic State fighters arrived and killed my son in front of my eyes, just because he was a policeman. They forced us to move to Mosul, where we lived for two years. I was very tired, physically and psychologically, and I couldn’t afford my medication anymore. I was starting to get gangrene in my right leg. So I amputated my own big toe because I thought it might stop the problem.”

By the end of 2016, life got even worse: “The city was under constant attack and my daughter was hit by shrapnel. She died instantly. Another of my daughters was paralyzed in the same incident. Shortly afterward, the army arrived in our neighborhood. We fled Mosul and ended up in this camp.” In Hasansham, Adnan became seriously ill. The gangrene gradually spread through his other leg. “We went to several hospitals and asked doctors to look at my leg, but we didn’t have enough money to pay for an operation. I was totally desperate.”

“You saved my life, I’m very grateful,” Adnan tells Mohammad. After checking his surgery scars, Mohammad encourages Adnan to stand up. He has brought some crutches so Adnan can practice walking. “Once the war is over and I can walk again, I’ll go back home,” says Adnan. “That’s all I want now. We’ll have to start from scratch, I know, but that’s okay, we’ll be happy.” He takes a few steps and then peers outside. A smile crosses his face, as if, just for a moment, he had glimpsed the future.