Nishan and Sonu are huddled together with their eyes glued to the screen of a mobile phone. They are chatting with their father in Qatar, where he works. The last time they saw him was a year ago. Their mother, Nira Rai, is next to them, working in the kitchen, which doubles as a bedroom. She washes the vegetables for dhal, a Nepalese lentil dish.

Nira Rai begins to share about the day her son’s life changed. “Nishan was five-years-old,” she explains. “He was coming home from school with his friends. On the road, they came across a truck. They were very excited. They rushed to the truck and clambered inside.

“That’s when Nishan fell out of the vehicle, but the truck was still moving. It was terrible. He was in so much pain he blacked out. I saw him the next day in the hospital and his leg was badly cut up. He was suffering a lot.”

For three days, the doctors did everything they could do to save his leg. But eventually, they decided  he needed an amputation. "When Nishan realized he’d lost his left leg, he cried and cried. He was devastated. He asked me if he’d ever walk again. To reassure him, I promised he would. But I was far from sure.” 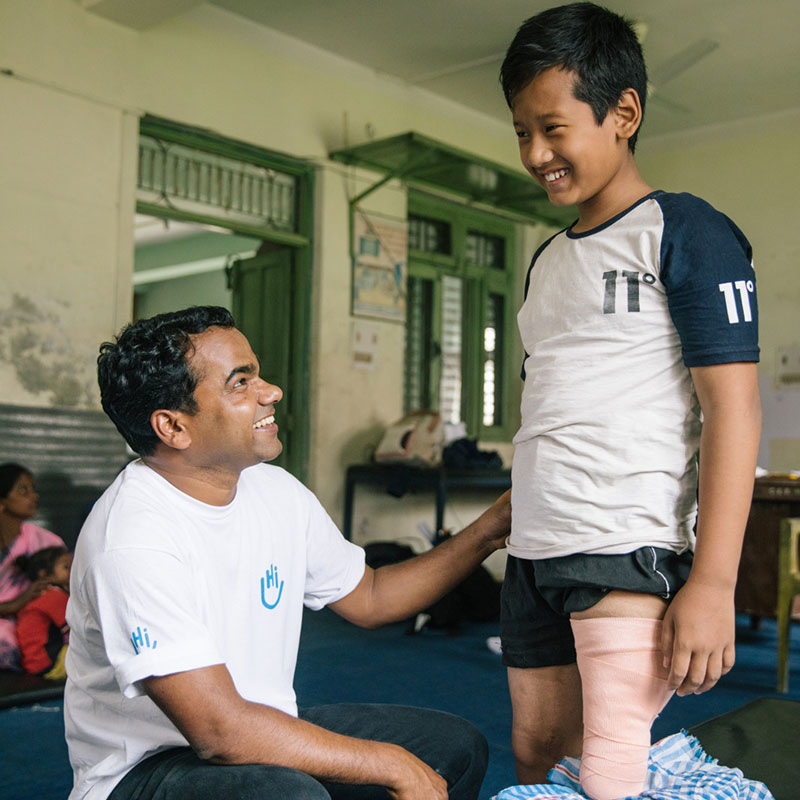 In 2012, Nira Rai met with a social worker from a Community Based Rehabilitation Center in Biratnagar, eastern Nepal, which is supported by Humanity & Inclusion. There, Nishan began his first rehabilitation session.

“We gave Nishan a prosthesis and helped him learn how to walk again,” explains Bharati Dev, a physical therapist with HI. “We also taught his family how to do the exercises with him at home. And as Nishan grew taller, we lengthened his prosthesis.

“In 2017, there were major floods across the whole district. The rehabilitation center was under water, and his prosthesis was damaged, so we had to stop his care. When we resumed our activities, in 2018, we gave Nishan a second prosthesis.

“Every three months, Nishan visits the center. He needs to be closely monitored because his prosthesis hurts him sometimes due to the poor condition of his stump. It can get infected very quickly,” Dev adds.

"Since he was fitted with his prosthesis, Nishan is more self-reliant,” his mother says with a smile. “After his accident, his friends laughed at him. He was depressed and withdrawn. Today, Nishan is very active. He plays a lot with his friends and his sister. And he loves badminton.” Nishan, who is now 14, goes to the Himalaya Secondary School in Damak, five minutes from home. He likes learning English, doing crossword puzzles, and using the computer. He has a close circle of friends and helps his mother in the kitchen. His dream? “I want to go to China,” he says. “It’s a big country. I’ve heard a lot about it. And then, I would like to see my father again.”

Many thanks to the American people, through USAID, for supporting this project.

Learn more about the work we do in Nepal.